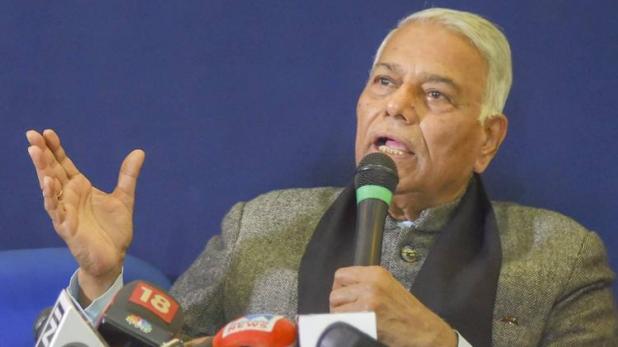 Former Union Minister Yashwant Sinha hit a big attack on the Modi government`s budget and said that it is like sharing money for people`s votes. In a special conversation with Aaj Tak, Sinha said, "The interim budget was to be brought. But the government presented its sixth budget by blowing up the constitution. They got the mandate for only 5 budgets, but as they do everywhere, they have presented their sixth budget without considering the traditions of the Constitution. That`s not going to pay attention to anyone. People are just talking that the budget is good and bad. `

Sinha said, `In this budget, the government`s only effort is to make cash available to different sections of people and take votes. I.e. cash for vote is their original mantra. Elections will be held in April-May, an item of expenditure that has been brought to the farmers. It is being implemented from December 1st. It has never happened before that expenditure should be implemented from the rear but this government is doing it. By the end of March if it is successful, the government will provide 2 thousand rupees to every farmer and elections in April-May, so it is not election cash for votes?

He further said, "The central government has never done such a thing in such a budget that has its vote-on-account. No one questioned that this government had no right to present the sixth budget. The Finance Minister is present to present the interim budget but present the entire budget. 70 years of tradition he has endured in his country. `

He said that there should have been a great improvement in the field of agriculture but it did not happen and voted for the cash for the budget. There are many things in the budget that show that the government is feeling that people will not be in the care of them. Will this budget go to the Standing Committee, someone has time for it?

The government made many major announcements to woo farmers, laborers and the middle class in its interim budget proposals presented before the public election on Friday. Annual income up to Rs 5 lakh per annum for the pension scheme for the unorganized sector workers and job profession has been tax free for giving small cash to the small farmers Rs 6,000 a year. A provision of Rs. 1.25 crore has been made in the budget for these three areas.This provision of the budget will benefit about 25 million people.

Let me tell that Finance Minister Piyush Goyal has made many populist announcements in the interim budget. He started the Prime Minister Kisan Pratishthan Nidhi Yojana under which small farmers will get cash of Rs 6,000 per annum in three installments. This plan will increase the annual burden of Rs 75,000 crore annually on the government. This assistance will be given to farmers who hold less than two hectares.

Indian Railways offers the facility of booking Tatkal tickets both online and offline. A Tatkal ticket is meant for passengers who do not have a reserved accommodation and are looking to travel at a short notice.

The Nation will never forget your greatest sacrifices. You people are real hero of our country. You will be always remembered by 125 crore people if India for your bravery and Tribute towards the nation

RRB Railway ALP Technician CBT 2 Answer Key 2019: "The answer key of the RRB Second stage CBT of ALP, Technician recruitment examination will be released either on Saturday or Sunday. Once released, the candidates will get a time period of two to thr

Yashwant Sinha said, "The government`s only effort in this budget is to provide cash to people of different classes and take votes. I.e. cash for vote is their original mantra. `

Budget 2019: Government looted the treasure, read what happened in your part

Budget 2019 Big Highlights Just before the Lok Sabha election, Piyush Goyal presented the interim budget today. Government has made big announcements for farmers, laborers. However, no changes have been made in the tax slab.

Army recovered a map from slain terrorists on which markings were made in Pashtun language leaving no doubt that they were trained in Pakistan and sent across the LoC to launch suicide attacks.

India is one of the youngest nations in the world. In order to capitalise on this demographic dividend, however, India needs to ensure access to quality education and employment opportunities. India’s youth increasingly aspire for greater empowerment

The Modi government is preparing to introduce a universal basic income scheme before the Lok Sabha election due by May, sources say.